In achlorhydria , the gastric juice of the patient carries too little or no hydrochloric acid at all. As a consequence, the absorption of substances such as iron is disturbed and pernicious anemia occurs. Treatment consists of dietary steps and vitamin B12 substitution.

In achlorhydria, the gastric juice of the patient carries too little or no hydrochloric acid at all.

The stomach acid supports the breakdown of food components within the stomach. It is an aqueous solution with around 0.5 percent hydrochloric acid. The gastric acid prepares the food pulp for further processing in the intestine. In achlorhydria, the composition of the stomach acid is pathologically changed.

The aqueous solution does not contain any hydrochloric acid as part of the disease. The disease is based on impaired secretion of hydrochloric acid by the parietal cells of the stomach. These cells are large glandular cells of the gastric mucosa that occur within the fundus and corpus ventriculi. The cells split off protons from carbonic acid and secrete them on the apical side in exchange with potassium ions.

In addition, they serve to transport chloride ions, which they transport from their basal side through the cytosol and release into the gastric lumen. This is how hydrochloric acid is produced, which lowers the pH of the gastric juice. In most cases, there is a complete loss of function of the gland cells in the context of achlorhydria, especially in the case of absolute achlorhydria. In relative or chemical achlorhydria, the gland cells fulfill their function and hydrochloric acid is only apparently absent.

Therapeutic interventions such as gastrectomy or therapy with proton pump inhibitors can, under certain circumstances, lead to functional impairments of the gastric juice glands. As a rule, HCl and an absolute lack of intrinsic factor appear in the context of achlorhydria on the basis of the causes just mentioned. The parietal cells are mainly stimulated to secrete by histamine.

The digestive tract is an independent functional system that itself produces stimuli to function. In connection with histamine, this means a vagal or gastro-induced histamine release by ECL cells that are located on the gastric mucosa in direct proximity to the glandular cells. For this reason, the system can also be disturbed in the case of diseases of the histamine producers. Achlorhydria is also often present in the context of the WDHA syndrome .

In addition to watery diarrhea , pernicious anemia or Biermer’s disease are the most important symptoms of achlorhydria. This type of anemia is due to a lack of vitamin B12. The intrinsic factor formation of the patient is disturbed. The typical symptoms of Biemer’s disease are tiredness , reduced performance , increased heart rate , severe paleness and a tendency to collapse.

Also jaundice with indigestion or abdominal pain may be present. In individual cases, neurological symptoms can also arise, especially numbness and abnormal sensations in the form of tingling skin or a furry feeling. In addition to falling asleep hands and feet, gait insecurities , coordination disorders and even paralysis can occur as part of the disease.

These symptoms are often rounded off by psychological and cognitive symptoms such as poor memory, difficulty concentrating , depression or psychosis . The absorption of nutrients is subject to disturbances in achlorhydria. Above all, gastric acid promotes the absorption of iron, so achlorhydria can cause an iron deficiency . The severity and symptoms can differ from case to case.

In addition to the typical symptoms, the anamnesis of the underlying diseases is particularly important when diagnosing achlorhydria. In laboratory diagnostics, achlorhydria appears as pernicious anemia and compensatory hypergastrinaemia. The state of achlorhydria is undoubtedly proven by means of pH analysis of the gastric juice, which is usually derived via a gastric tube .

Pentagastrin is given as a secretion stimulus before the examination. The disease is routinely clarified using sonography , X-ray imaging or gastroscopy . Complete destruction of the parietal cells is not fully reversible.

Achlorhydria is a serious symptom and can lead to severe health impairments for the patient. In most cases, the symptom is primarily seen as severe diarrhea. In addition, there is also anemia, which leads mainly to extreme paleness, permanent fatigue and poor performance on the part of the patient.

Most of those affected also complain of headaches and dizziness . The achlorhydria also leads to digestive disorders, which can lead to abdominal pain and inflammation in the abdomen. The anemia also causes numbness in the extremities. The dizziness often leads to disturbances in the gait pattern or disturbances in concentration. The patient’s everyday life is severely restricted by achlorhydria.

Treatment by the doctor does not take place directly. In most cases, the patient must follow a healthy diet that will limit the symptom. In general, achlorhydria can be severely restricted after about a week and does not lead to any further complications or consequential damage. If the symptom is not treated, damage to the extremities and internal organs occurs in many cases.

Achlorhydria must always be treated by a doctor. In addition, the symptoms can be alleviated with a range of home remedies and self-measures. Dietary measures in particular have proven effective. The deficiencies can be effectively compensated for with vitamin B12, taken in the form of appropriate foods (bananas, oranges, etc.) or dietary supplements. The consumption of iron-containing foods and preparations can help against the typical symptoms of achlorhydria.

In order to determine the cause of the achlorhydria, a complaint diary should also be kept, in which the type and occurrence of the complaints is recorded. In addition, measures may have to be taken against the psychological complaints associated with the disease. It is advisable to speak to a therapist regularly as part of the treatment and to work through the problems. If the achlorhydria is overcome, a suitable nutrition plan should be drawn up in consultation with the family doctor or a sports doctor . This can prevent deficiency symptoms and the severe symptoms of achlorhydria from occurring again.

The most frequently used therapeutic steps for absolute achlorhydria are dietary measures. These steps are combined with countermeasures against pernicious anemia. To compensate for the vitamin B12 deficiency , patients are given intravenous or intramuscular vitamin substitution. This type of therapy is purely symptomatic.

The cause of the anemia and the inability to secrete the glands are therefore not eliminated by the treatment steps mentioned. Nevertheless, symptomatic therapy at least improves the manifest symptoms of those affected. The supportive dietary measures prevent the situation from worsening. In certain cases, iron substitution may also be necessary, as iron is an important part of the blood and thus the transport of oxygen.

Achlorhydria can lead to serious consequences and complaints for the patient, which can be life-threatening. In most cases, this leads to pronounced anemia and severe diarrhea in the patient. The person concerned is always tired and the tiredness cannot be compensated with the help of sleep . Often, performance is also greatly reduced, so that normal activities or sporting activities can no longer be carried out without further ado.

The heart rate is increased and physical exertion can lead to loss of consciousness . The symptoms are extremely limiting in the patient’s life. This is especially the case if the achlorhydria leads to paralysis or abnormal sensations in different areas of the body. The affected person has difficulty concentrating and sometimes suffers from psychological complaints or from depression . Thoughts of suicide may also arise. Movement is restricted and coordination is difficult.

It is usually possible to treat achlorhydria with the patient taking medication. With the help of the medication, most of the symptoms can be treated and contained relatively well, so that the life expectancy of the patient is not reduced.

Achlorhydria can hardly be actively prevented. Gastric cancer, for example, is associated with genetic disposition. For autoimmunological diseases and the associated destruction of the gastric glands, medicine has not yet agreed on the exact pathogenesis. Since these two diseases are the most common causes of achlorhydria, prophylaxis is correspondingly difficult.

In most cases, the person affected with achlorhydria does not have any direct options for follow-up care. However, these are not necessary, as the disease can be treated relatively well. There are no particular complications. As a rule, the person affected with achlorhydria is dependent on taking medication to alleviate the symptoms of the disease.

Furthermore, a healthy lifestyle with a healthy diet has a very positive effect on the course of the disease in achlorhydria. Here, food with a lot of iron is particularly recommended in order to counteract the iron deficiency. Contact with other sufferers of achlorhydria can also be useful, as this often leads to an exchange of information. The life expectancy of those affected is not reduced by the disease, but they are dependent on therapy.

If the composition of the stomach acid is pathologically changed, it is mostly an impairment or destruction of the parietal cells of the stomach that is responsible. Such impairments are often the result of an underlying disease of the gastrointestinal tract, which can be effectively prevented by a healthy diet. The stomach should not be irritated by foods that are too fatty or too spicy. High-proof alcohol and black coffee are better not consumed in large quantities and under no circumstances on an empty stomach. Regular, smaller meals are also less stressful than large amounts of food at once.

If achlorhydria has already occurred, it is essential to consult a doctor. However, those affected can help alleviate the symptoms. The behavioral measures described above should be strictly observed in order not to unnecessarily burden the stomach. Some of the symptoms of achlorhydria can also be treated with dietary measures. If a vitamin B12 deficiency has occurred, we recommend consuming appropriately fortified foods. Plant-based milk alternatives and toothpaste enriched with vitamin B12 are particularly practical .

Special dietary supplements or iron-containing mineral waters help against the frequently occurring iron deficiency , but because of their unconventional taste they are not available in stores, but can only be tapped directly at the source in spas.

In the case of severe deficiency symptoms, an ecotrophologist should be consulted in addition to a doctor , who will draw up a nutrition plan tailored to the patient’s specific needs. 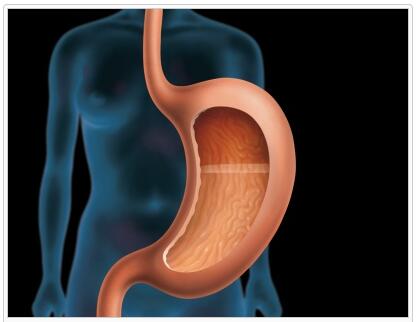